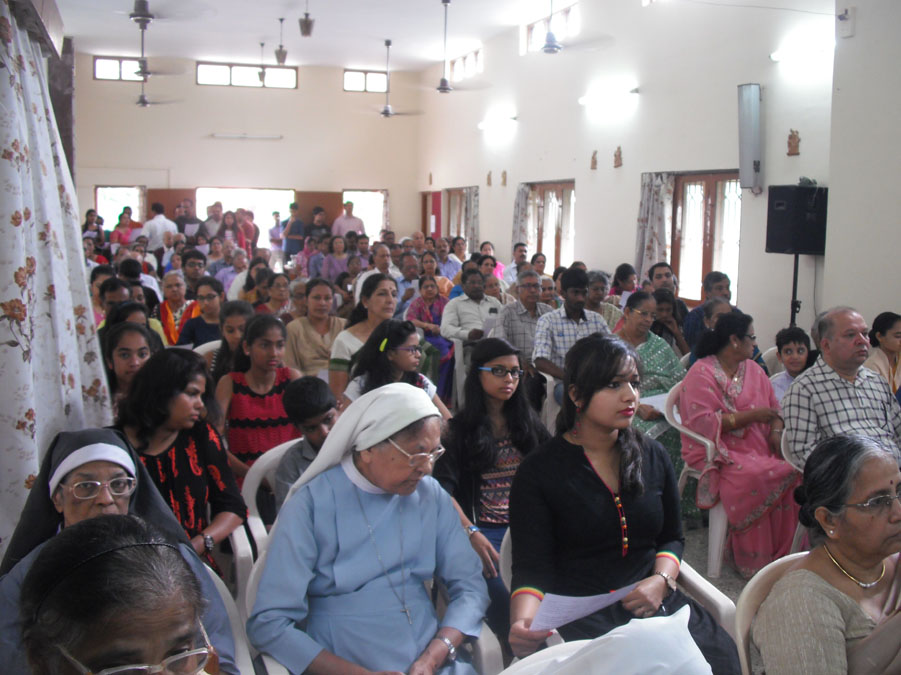 After the Mass, KONCAB had arranged breakfast for the members. The members then assembled in the School Hall to participate in the 23rd Annual General Body Meeting.

The meeting began with the prayer lead by Rev. Fr. Praveen Pinto. President Mrs. Ida Sequeira then called the meeting to order. Secretary Mr. Jhonas D’souza presented the Secretary’s report for the year 2014-15 which was approved by the general body. A minute’s silence and prayer was offered for the repose of souls of members and well-wishers departed in the past year. New members who joined KONCAB in the past year were introduced to the august body.

Treasurer Mr. Sunil D’Cunha presented the audited accounts for the year 2014-15 and it was approved by the august body. Mr. Mark D’Souza was appointed as the auditor for the year 2015-16. KWT Secretary Mr. Joachim Serrao provided an update on the KWT Samudai Bhavan building project and informed the members that the project work has come to stand-still due to shortage of funds. He sought full hearted support and donations from the members.

Thereafter Col. Victor Gomes who presided over as Returning Officer conducted the election proceedings for electing new Executive Committee for the term 2015-2017. As per the nominations filed before him, all new Committee members were elected unopposed. The post of Vice President, Asst Treasurer and one MC member were filled by the in house nomination by the august body.

The outgoing president Mrs. Ida Sequeira thanked the committee and all members for their support during her tenure and congratulated the new committee and wished them success. The newly elected president Mr. Jhonas D’Souza thanked the members for the faith in him and sought everyone’s support in the coming days. He recounted the efforts of all the previous leaders in developing KONCAB into a well-known and prestigious association in Bangalore and promised that he along with the elected committee will do their best to take the association in the same direction on the principles laid down by the predecessors.

Outgoing Jt. Secretary Mr. Godwin Castelino proposed vote of thanks and the AGM was adjourned. Later the members were entertained with Housie-Housie game. Lunch was arranged by KONCAB for all the members.